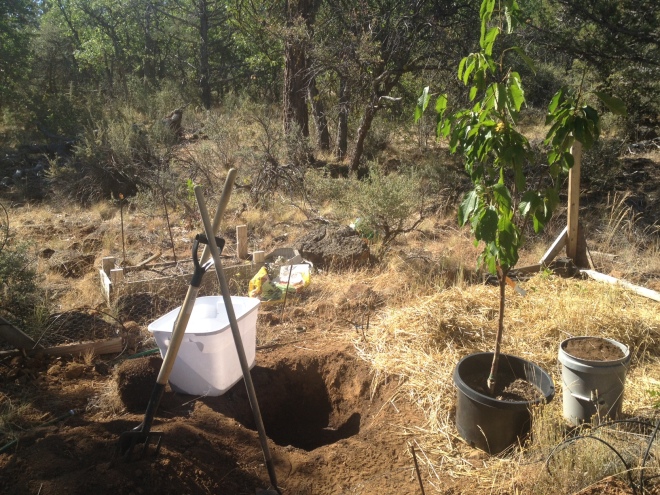 On a recent trip to Serenity Valley, I planted a cherry tree. Now, planting a fruit tree in the high desert, where there is no rain nor running water for half the year, may seem foolish. And maybe it is. But I planted it anyway. I think of it as an act of commitment; I’ve planted a tree, now I have to keep it alive.

A couple of recent developments make this decision slightly less foolish than it may sound at first. One is that I got a 300 gallon water tank, which I plan on hooking up to my gutters to collect run-off this Winter / Spring. There’s usually 20-30 inches of precipitation in the wet months, and even if I manage to collect 10″ of that, I should be able to harvest around 1000 gallons off my cabin roof alone. (If you want the math, it’s 0.6 gal / 1″ of precipitation / 1 sqft of surface area. So, 0.6 gal * 10″ of precipitation * 170 sqft roof = ~1020 gallons.) If my math is right, my 300 gallon tank won’t capture all the available water, so I’ll probably add more. The other recent development is that I (or, rather, a neighbor) found a couple of sources of water closer than the gas station in town, some 17 miles away. It turns out there’s a volunteer fire station 3 miles down the road that has its own well, where locals can take as much water as they want for a very small monthly fee. There’s also apparently a local who owns a water tanker, and will deliver water (if he likes you). So, between my rain barrels and an abundant water source just 3 miles away, I’m fairly confident I can keep the cherry tree watered for the foreseeable future.

So, why a cherry tree? Because I like cherries. Well, first of all, not all fruit trees can survive the cold winters we sometimes experience up here in the mountains. While not common, temperatures can drop down into the negative (Fahrenheit), with record lows down into the -20Fs. So anything that can’t withstand -20F won’t make the cut. At the local hardware store, that narrowed the selection down to: apricots, apples, and cherries. Of those, I like cherries the best. I suppose apples might be more versatile, since you can make cider and apple sauce, use them for baking, and the fruit lasts a long time if kept cool. (Hmm… maybe my next tree will be an apple tree.)

The next step was to choose a variant. They had a few options, including famous sweet variants like the Rainier cherry, but all the sweet variants need pollinators (i.e. another cherry tree). So I ended up picking a Montmorency cherry tree, which is a self-pollinator and semi-dwarf; two characteristics that should work well for me. On the other hand, the sour fruit that the Montmorency bears will only be good for canning or baking. It’s a bummer I won’t get to eat sweet fruit right off the tree, but seeing how cherries have a short shelf-life, having a variant suitable for preservation probably isn’t such a bad idea.

Planting a tree isn’t terribly exciting in and of itself. Digging the hole ended up being a lot of work because I encountered a rock-hard layer of clay that I decided to try and bust up  — by repeatedly driving a pitch-fork into it with a sledge hammer. A pick-axe probably would’ve made things easier, but I didn’t have one.

Once I had the tree planted, though, I decided to try something new. I’d read that Native Americans and others living in arid regions were known to mulch their plants using rocks. The theory is that the rocks would slow moisture evaporation, dampen extreme temperatures by acting as a thermal mass, and possibly also improve the soil by slowly leeching minerals. I know that moisture evaporation and extreme temperatures are a concern where I am, so I decided to give it a shot. I also placed 3 drip irrigation heads (of which two you can see in the photo) between the rocks. Incidentally, the drip irrigation is the same gravity-fed system hooked up to my water tower that I set up in previous years, which keeps my garden watered while I’m away with the help of a garden timer. Finally, I covered the whole thing with straw to provide further shade from the harsh sumer sun and cold winter frost.

So, we’ll see how that goes. If all goes well, we’ll start seeing cherries in a couple of years…