You might’ve heard about California’s drought. While the rest of the state is figuring out how to use less water, the challenge I’ve had on Serenity Valley this year is the opposite: how to use all the water I have. The 1000 gallon rain barrel I set up last year was full by early February, and was then topped off again in early July thanks to some unseasonable summer showers. Add the 300 gallons in my other tank, and I’ve got 1300 gallons to play with this year. Granted, it isn’t much water at all, but using it up has turned out to be a greater challenge than I expected.

I’m not there much so most of the water is intended to be used to irrigate my garden, which has turned out to be less than trivial. I initially thought I could hook up my drip irrigation lines to the 1000 gallon tank via a timer, but it turns out the timer all but kills the pressure, so the drip heads don’t work consistently, or at all. Using the 50 gallon tank on the “water tower” solves this problem because I can set up the irrigation timer several feet off the ground, which generates enough pressure through gravity. However, since I need to transfer water from the bigger tank to the water tower myself (using an electric pump), those 50 gallons need to last while I’m gone — which can be as long as a month.

One option was to build an automated system to transfer water from the bigger tanks to the water tower. But, automated things are prone to fail, and if the system failed, the 50 gallon reservoir wouldn’t last very long. Plus, the “water tower” was starting to show some age, being made of untreated 2x4s and having been exposed to the elements since 2010.

So, clearly, what I needed was a bigger, better water tower. I’ll let the pictures tell the story… 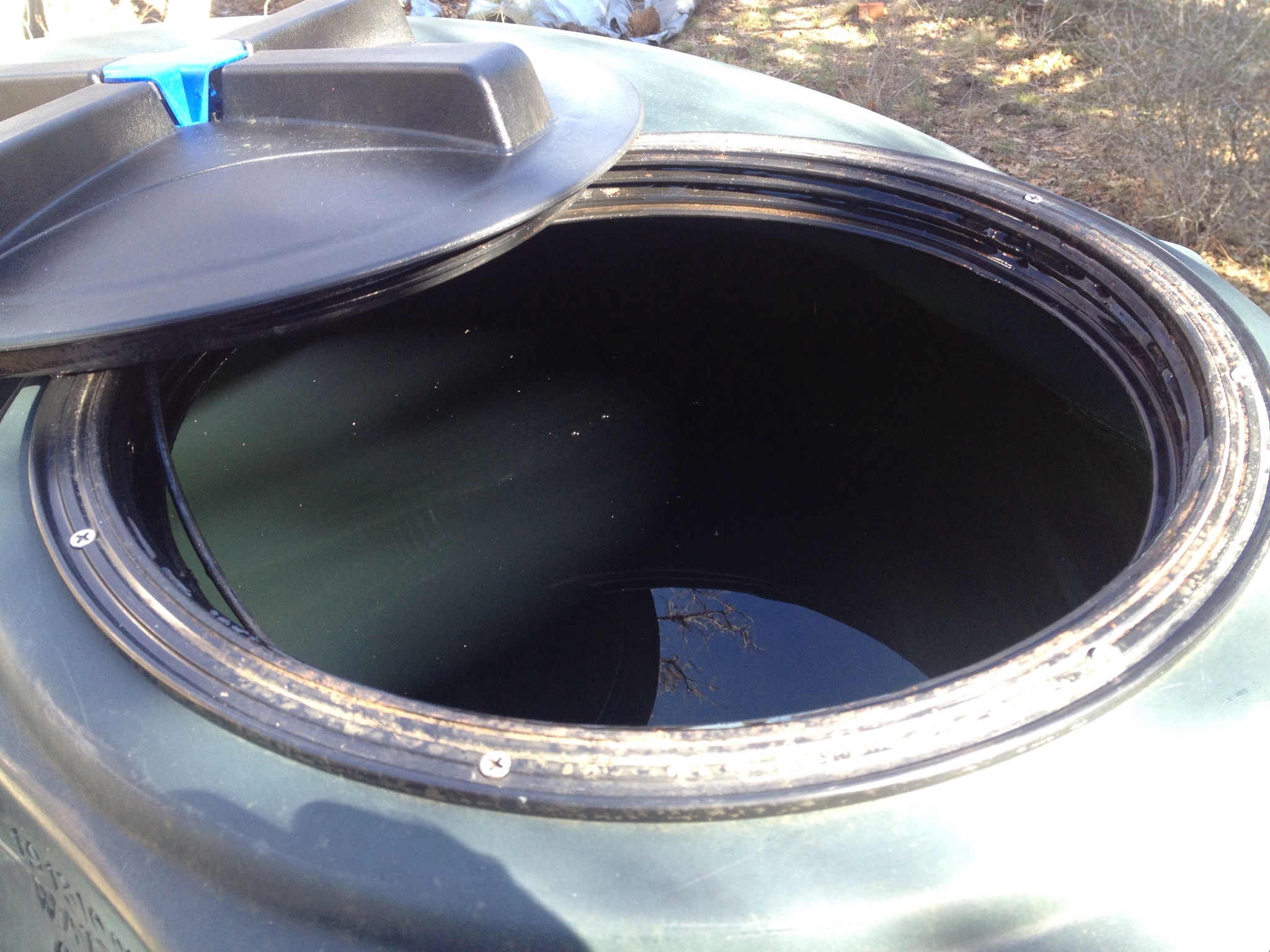 My 1000 gallon tank was nearly full by early February. Some off-season summer rain then topped it off again in early July… Need to use more water!

Experimenting with 2 irrigation lines set on separate timers. One was set to go every 7 days, the other every 3 days. Also, Water Tower 1.0 still on active duty! 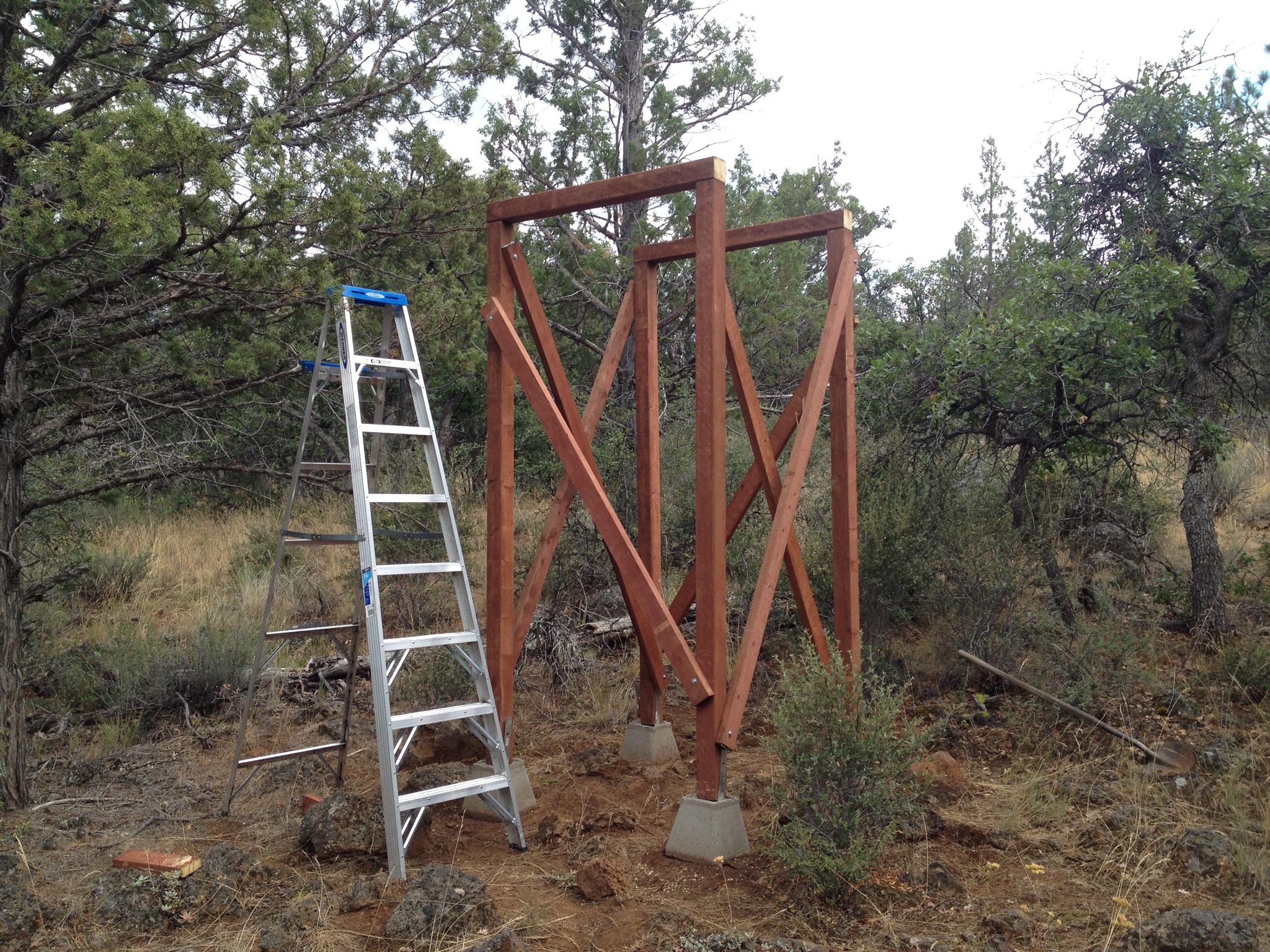 Water Tower 2.0, standing. The posts are 8ft tall, so the top is about 9ft off the ground. This is also probably the sturdiest structure I’ve ever built… 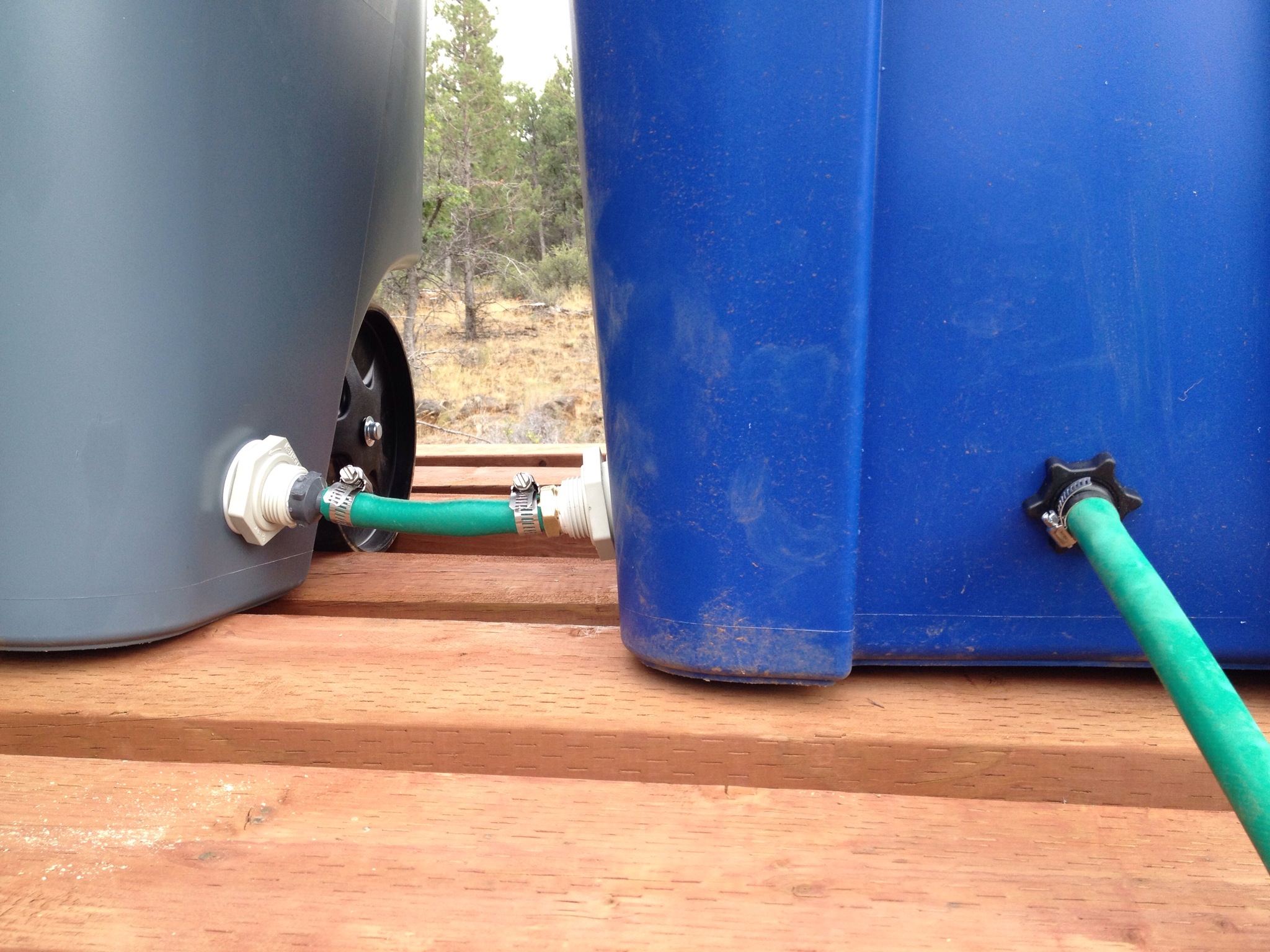 Trash bins never looked so good! The irrigation timer is a full 8ft off the ground, which drives plenty of pressure to the drip irrigation heads. Some day I might replace the bins and upgrade to a 200 gallon tank, if I have confidence it’ll support 1600lb of weight.

I can’t believe how quickly time is flying by these days. It seems like 2015 started just the other day, and now it’s almost August…

Where have I been this whole time? Well, let’s see. After my trip to Dancing Rabbit Ecovillage last Fall, I returned to California, feeling almost certain that I was going to pack up and move there in the near future. Yet, as I contemplated my next steps, the word that kept rattling around in my head was: sustainability. It was a concept I’d spent weeks thinking about and talking to people about with at Dancing Rabbit. After all, as an ecovillage, environmental sustainability is a fundamental aspect of the community, and is perhaps what they are best known for. But, what I learned in my weeks there is that there are many other facets to sustainability that are critically important. At the end of the day, any endeavor, environmental or otherwise, is only impactful to the extent to which it can sustain itself. This is true of businesses, non-profits, social movements, and of course, individuals.

Once I was able to frame life as this multi-variable sustainability equation, solving it became easier. Though the last several years have been tumultuous in many ways, by throwing myself into a myriad of situations (too many to list here), I was able to learn a lot about what I liked and didn’t like, what worked for me, and what didn’t. I had learned that I need a sense of purpose. I learned that I need to feel like what I’m doing has a positive impact on peoples’ lives in a tangible way. I learned that my work needs to align with my values. I find fulfillment in making things, and want to work with other people. I need a good balance between time to myself and time with people I feel connected to.

Long story short, I feel very fortunate with, and very happy about where I ended up these past several months. In February, I started working for an education startup in San Francisco, where I spend my days helping build a modern primary education system from the ground up. I joined the team after I heard about what they were doing, and thought to myself: “Wow, that’s the school I wish I could’ve gone to.” Coming from someone who hated school, that’s saying something. The one downside is that I don’t get to spend as much time in Serenity Valley, but I’m feeling pretty ok about that. At this point, it feels like a long term project, and I feel fortunate to have such an awesome “hobby” along with a job I love. You can’t ask for much more, really.

But, don’t worry. While the updates may be far and few between, this project is far from over. I still have Hut 3.0 to build, and I still have a dream of someday spending a year homesteading on the property… someday, when I have a family.