The Google Map embedded above (if you’re reading this in a feed reader and don’t see the map, read this post here) shows the route we took from San Jose (where I returned my apartment keys) to Hyde Park. According to Google’s estimates, the route spans over 2700 miles, although with the little detours we took and circles we drove around in alien towns, my odometer tells me the trip was more like 2900 miles.

I have 3 impressions of this journey that stand out in my mind. The first is: this is a big fucking country. Having only flown or taken the train before for such long journeys, where you’re practically teleported from one side of the country to the other, I’d never truly internalized the scale of this country. But on this trip, I had my foot on the gas pedal for every mile of the way (except for the 400+ miles that Nikki drove). Sure, it’s nothing compared to, say, hiking or riding on horseback for long distances, but I was awake and aware for every mile of it. And now, even with the aches in my knees subsiding, I know how big this country is: It’s fucking big.

The second lasting thought I had was of unity, or maybe at least uniformity, both in good and bad ways. Having grown up in Germany where you were never a day or two’s drive (at most) away from a foreign country with a foreign language, customs and architecture, I found myself speaking slowly to people at the market or motel after crossing state lines, half expecting them to respond in a foreign tongue. But in reality, no such thing happened. We’d cross from state to state, and people would still speak the same language, the menus would have the same food, and for the most part, everything would look the same. The same chain restaurants and motels, same strip malls, same customs, same people… Sure, in some places, old men in cowboy hats may have stared at Nikki and I just a split second longer than would be considered polite in San Francisco, but with the exception of people pumping gas for us in Oregon, our experiences weren’t markedly different anywhere compared to anywhere else. Of course, this was also a bit of a disappointment. I had hoped that we’d find the country less uniform, that Idaho would be distinctly Idahoan, Montana defiantly Montanan, South Dakota surprisingly South Dakotan, and Iowa inexplicably Iowan. The only consolation was the natural beauty, or what little glimpses of it we caught, which varied somewhat from state to state. In Montana, we drove through a blizzard, and saw grassy hills with crowns of pine trees. South Dakota had rolling grasslands as far as the eye can see, albeit fragmented by roads and fences. We saw large numbers of prairie dogs and antelope in Montana, a lone mountain goat and many quail in South Dakota. But even the landscape wasn’t strikingly different to what you would see in parts of California. Except, perhaps, there was just more of it. 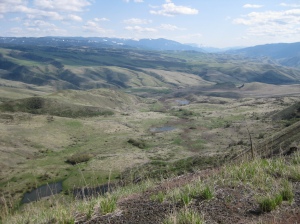 Throughout the whole trip, I was also struck, and saddened, by how detached we are from the land as a society. Most of the people are in cities and towns, but even the large tracts of land and open space out there is owned, fenced in, often torn up or over-grazed. Even on public lands, people are constrained to roads and prescribed trails, restricted from roaming freely as people once did. There were usually no cars within sight on the smaller interstates we mostly drove on; most other drivers were on big major interstates, where their views are obstructed by semis, bill boards and buildings that inevitably line the big highways. So even when people drove through states like Montana or South Dakota, I got the feeling that what people actually saw was often severely limited. And forget even trying to see more by going on foot or horse back as our predecessors once did; you’d be arrested (or worse) for trespassing before getting far, assuming barbed wire fencing didn’t stop you first. As someone who loves to roam in the wilderness, I was saddened by this thought, and it reaffirmed my desire to buy a large tract of land where I can be free, one with the land, unobstructed by no man.