Now that I drove to the Atlantic Ocean and can claim to have driven coast to coast, I’m heading back west. I should be back in Chicago tomorrow, and California some time next month… I’m spending the night in a cheap smelly motel somewhere in Pennsylvania, but just wanted to jot down some raw thoughts from this trip.

The East Coast, especially the DC area, feels so much heavier than California and Silicon Valley. By heavy, I partially mean it literally. Great people, their words, the stories of their achievements and sacrifices, are immortalized in marble, housed in great granite structures, forged in bronze. The stories that are told hold so much more weight too. Being in a place with so much history, while reading my usual blogs that cover news from Silicon Valley made me realize how trivial that world is. In Silicon Valley, people like Steve Jobs, Sergey & Larry, Gates, Ellison are revered as if they are Gods. They founded multi-billion dollar corporations. Great. Guess what Thomas Jefferson, James Madison, et al did? They founded a friggin country, in a world where the “evil empire” wasn’t some corporation in Redmond, WA, but a mighty nation ruled by a monarch in London, who responded not by launching another version of Windows, but by sending a grand army and armada to crush this new startup called the United States of America. Then I flip to Reader, and people are going gaga about Yahoo and Microsoft’s search deal. Meh. Who’s going to remember that in a century (or even 10 years)? Who cares?

Today, I was at Gettysburg. In a three day battle, over fifty thousand Americans died. For the last week or so, people supposedly have been complaining about Obama meddling in local politics. Well, you know who else meddled? How ’bout Abe Fucking Lincoln. A bunch of states seceded, and he said “fuck you, I’m going to p0wn your ass and roll you back into the Union.” And he did. Six-hundred thousand Americans (2% of the population) died in the process, but he did it, and we have one big bickering country rather than two bickering little countries. In the Lincoln Memorial in DC, behind the big ass statue of Lincoln are engraved the words: 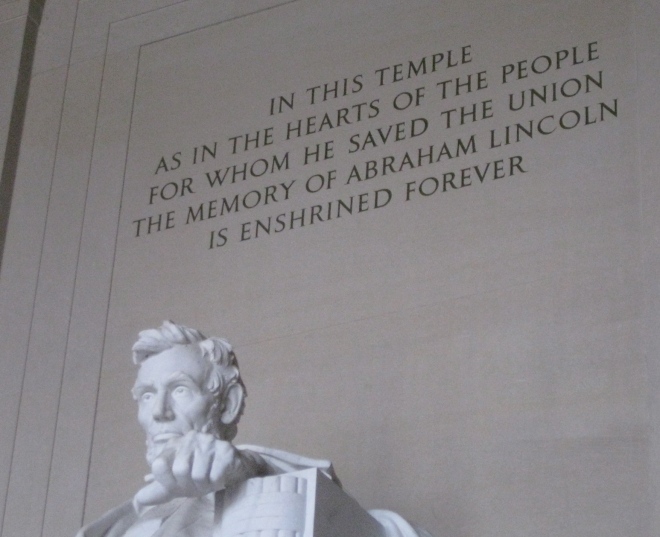 If you ask me, he deserves to be enshrined forever. Next to his statue, there’s another engraving dedicated to those who died in the Civil War. Many of them died after getting hit by a musket (or minie, or cannon) ball while walking, in a line, up-right, without armor, into volleys of incoming fire. They too deserve to be remembered, even if only for having the guts to do such a thing. In comparison, our generation feels like a bunch of sissies. I used to fear that little of our generation would remain centuries from now, when the silicon on which our digital lives reside return to dust. But hell, maybe nothing we do will be remembered because we haven’t done anything worth remembering. We don’t have statues and shrines ’cause we haven’t done shit.

What I’m feeling is a strange mixture of guilt and gratitude. Guilt because, while the people memorialized here dedicated their lives (and deaths) to some greater ideal, I can only say that I serve myself. But gratitude because I believe that’s what the people we remember wanted us to have. They wanted us to enjoy our freedoms, security and wealth, not to wallow in guilt or live dull lives. A few great men and women and countless ordinary people founded this country, then protected it and improved it all these years, so that we can live better lives than they did. So we owe it to them to live better lives, to fulfill more of our dreams than they did, to fill our lives with more joy than they could.

When I go off to my land and fulfill one of my childhood dreams, I’ll do it with gratitude to those who came before me, and as an example for those who will come after me; to prove that in this society, with a little luck and a little work, we can fulfill our dreams.

One thought on “The Weight of History”