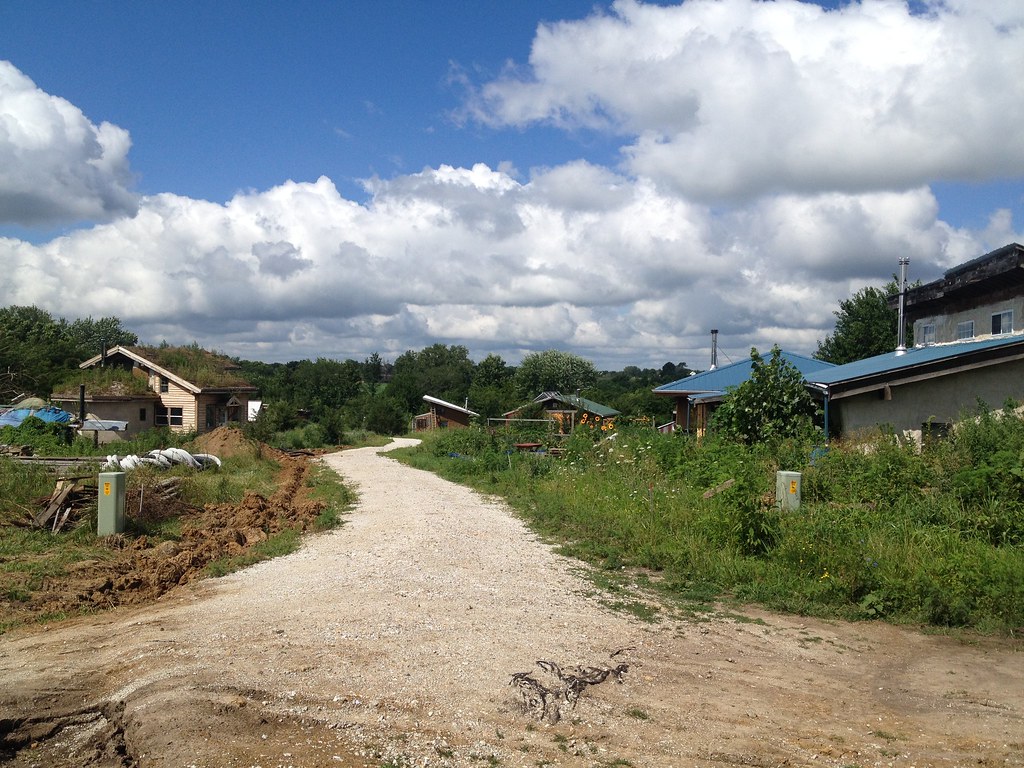 As I sat in a toilet stall in Terminal 1 of the Minneapolis St. Paul airport, I thought to myself, “this is nuts”. There I was, depositing my output in a pool of potable water, about to flush it with even more potable water, to be sent to a treatment plant where the sewage would be processed using electricity generated in large part by burning coal. No part of that made any sense.

Twenty-four hours and a few hundred miles prior to that, I sat similarly in a communal stall, except this one was over a bucket. When I was done with my deposit (lovingly called “contributions” by residents), I had simply covered it up with a bit of saw dust. The bucket would be carried down to the compost heap, and a few years later, the resulting compost would be spread in the garden to enrich the local clay-y soil, which in turn would help produce food to be consumed. That made sense.

When I decided to visit Dancing Rabbit Ecovillage in rural Missouri, I told some friends that I was visiting a “crazy hippie commune.” I wasn’t entirely serious about the “crazy” label, but even I didn’t quite anticipate how sane the place would feel, and how crazy the “real world” would seem once I came out of the experience. 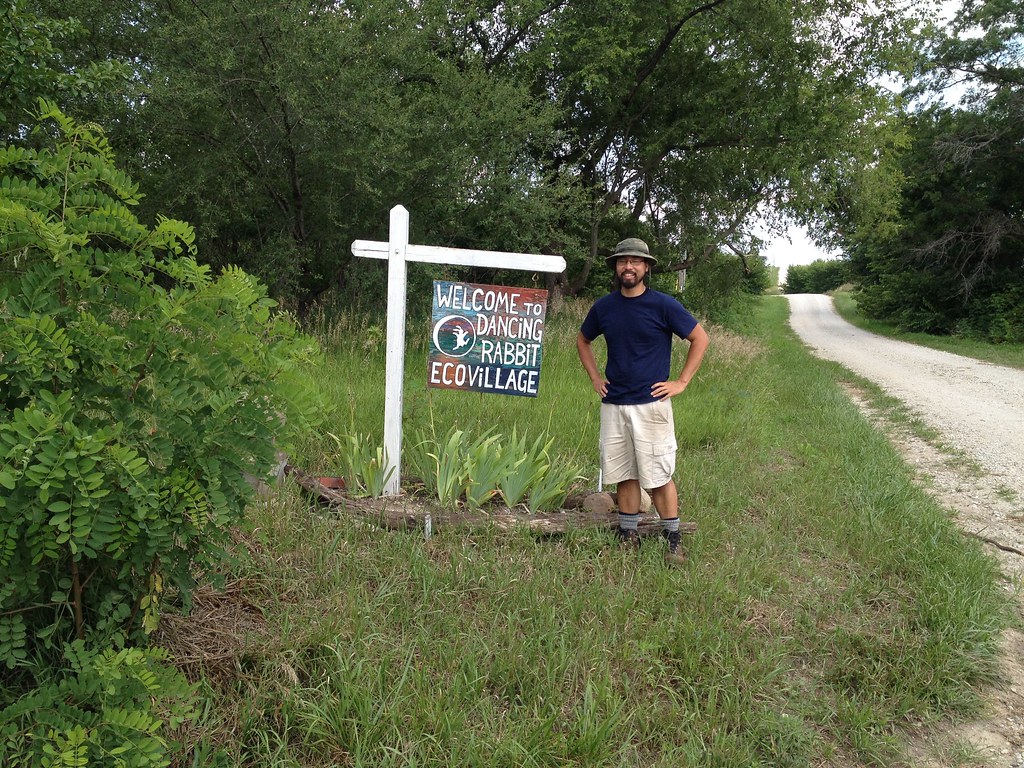 Let me step back. In late July, I spent several days at Dancing Rabbit Ecovillage to attend a workshop. Located in north-eastern Missouri, about 3 hours from St. Louis near the town of Rutledge, Dancing Rabbit (DR) is part of a cluster of 3 sustainability-focused intentional communities (the other two communities are Sand Hill and Red Earth farms). Originally founded in the late 90s by a group of young Stanford and Berkeley grads from the Bay Area, the village today is home to some 40 to 70 residents and visitors of all ages, including over a dozen children. They live in accordance with a small number of covenants, most of which are designed to make life more environmentally sustainable, while still allowing for enough flexibility to be accepting of a range of personal preferences in areas such as diet, technology use, spirituality and community involvement.

Perhaps one of the most noticeable physical characteristics of the community is its structures (see pictures). In addition to one large dorm-style two-story straw bale building, most members live in a wide variety of shelters, ranging from tents and converted busses and shacks, to beautiful and modest yet comfortably sized single family homes. What gives the place and its structures a distinct look is probably the combination of one of the covenants (that all structures use natural materials and locally harvested or reclaimed lumber) and the county’s lack of building codes. The covenant banning new lumber has practically forced folks to replace traditional stick-framed construction methods and factory-made materials with beautiful local natural materials, while the lack of building/zoning codes has allowed for experimentation and creativity. Since there are no codes to dictate minimum house sizes or densities, and there’s no requirement for homes to have road frontage, the village is densely inhabited but with enough green spaces and gardens interspersed such that it doesn’t feel crowded. I was also told that warrens (as plots of land are called there) and structures were planned specifically to encourage interaction among residents.

I was impressed with the community’s commitment to environmentally sustainable practices. Although the village is now hooked up to the electricity grid and city water, they are incredibly mindful of those resources. Most folks seem to be living off of harvested rainwater, and I heard the community generates 3-4x more electricity through solar panels and wind turbines than it uses (they got tied to the grid to be able to charge an electric vehicle, essentially using the grid as a buffer, which IMO is probably more environmentally friendly than the alternative: a big bank of lead-acid batteries). Some people use gas for cooking (though I did see quite a few solar ovens and a couple of cob ovens), but they rely on passive heating and locally harvested firewood for warmth in the winter. They also share just 4 cars among the entire village, and supposedly use something like 94% less fuel per person than the average American (on driving). Overall, other than the restrictions around building materials, the sustainability practices seemed quite similar to how I’ve lived on my property.

What impressed me most, though, about DR was the fact that the community functions at all, and has for almost two decades. It’s one thing to get a bunch of idealistic young hippies together in one place. It’s another to go from 6 to 60 people, and have a community in the middle of nowhere where people can live reasonably comfortable lives. Granted, even in my short stay, it was clear that not everything was peachy. The last of the original founders had just left indefinitely a few days before I got there, and I caught glimpses of some large disagreements about the future of the community. Nonetheless, it appeared that they had figured out an economic model and governance model that was functional and self-sustaining, which alone is quite impressive.

Since I mentioned it, I’ll try to briefly describe their economic and governance models. Keeping the cost of living low seems to be a priority, and most residents pay land use fees (I think on the order of tens of dollars a month, depending on home and lot sizes) as well as 2% of their income. Sources of income seemed to vary quite a bit: food stamps, trust funds, working in the village or for the nonprofit, working online, renting cabins, etc. The village and umbrella non-profit organization also makes money from hosting workshops and visitors, but it wasn’t clear how much that accounted for the village’s revenue. Other than that, people pay for their own needs, in some cases by buying into individual co-ops (for food, for transportation, for showers, for power, etc). As far as governance goes, they have an interesting streamlined version of a consensus-based model, where functional areas are broken into separate committees. The committees are responsible for taking proposals through a consensus-based process, but eliminates the need to have everybody in the village in the same room at the same time for all decisions. There’s also a village council and a system called “power levels” that delineates what kind of decisions can be made where (I think) but my understanding is murky on those areas. 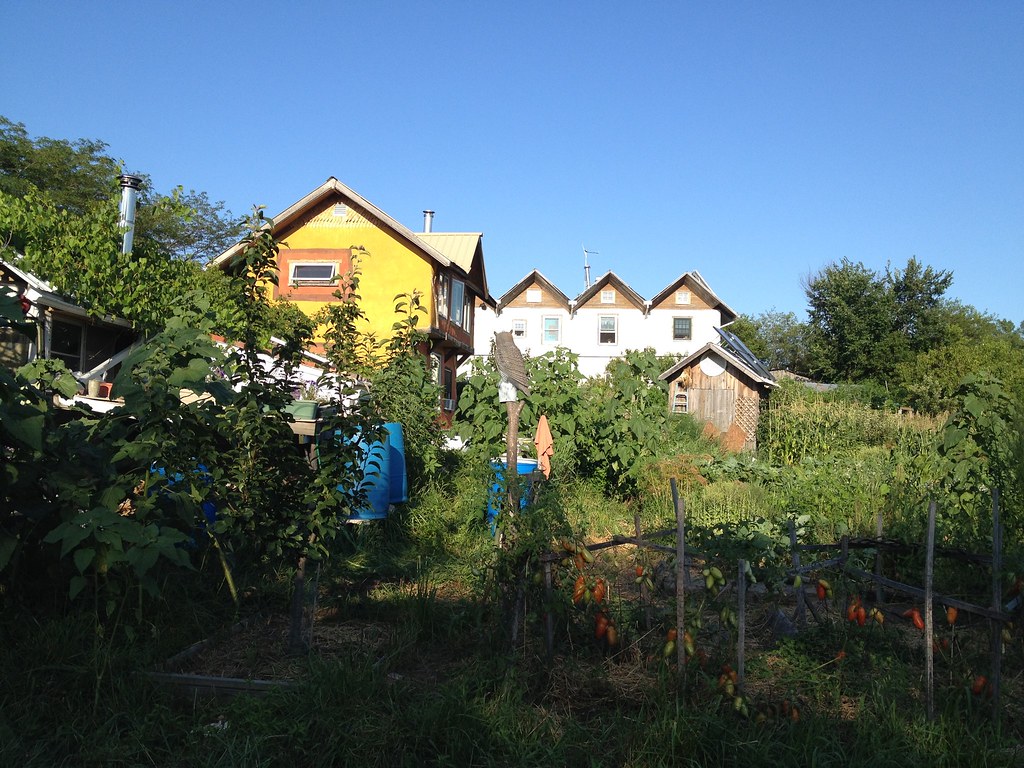 When I think back at what it was like there, this is what I experience in my mind: Wind turbines whir overhead, the sound intermixed with the laughter of children playing on the dirt paths as a couple of old dogs look on and a pair of ducks waddle by. The people seem relaxed, and happier. They stop to interact with each other. All around, we’re surrounded by the green hues of trees and gardens, the blue of the sky, and the bright yellows and oranges of colorful houses blending into the landscape with more crooked lines than straight ones. It’s pretty damn idyllic.

My first moments of arriving at DR reminded me of the trope often seen in post-apocalyptic narratives: the promised land where people live happily and peacefully, free of whatever ails the world around them. Here, I thought to myself, people live sane and sustainable lives, in community. It combined aspects of what I loved about living on my property, with what I’ve been searching for more recently: a community. It opened my mind and eyes in the way that my first Burning Man did; it made me realize that another kind of life and society was possible. I don’t know if DR, specifically, is my ideal. But it made my ideal a little bit less of an abstract dream, and more of a reality than it ever was.

Yet, when I step back, big questions also loom in my mind. As impressive as it is that this community that started with half a dozen dreamers has grown to a village with dozens of people, is this The Answer? Some folks at DR want to grow the village to a 1000 people, which seems like quite a challenge. And even if the model could be replicated 1000 times over, which, again, sounds like quite a challenge, that’s still only 1 million people out of the over 300 million people in our country. And, let’s not forget the rest of the world. There are around a billion people who live in rapidly developing countries where, over the coming years and decades, they may achieve the kind of affluence that will allow them to live increasingly energy and resource intensive lives. So, in the grand scheme of things, getting a large number of people to slightly change their behaviors might be far more impactful than getting a tiny number of people to live drastically different (albeit sustainable) lifestyles.

This conundrum may, in many ways, be at the root of my inability to choose definitively between a rural life and a life in the city. I am happier in a rural setting, and I want to live a lifestyle that is congruent and consistent with my values. But what draws me to the city, at least partially, is the promise to affect change from the belly of the beast. That is the promise of Silicon Valley and the San Francisco Bay Area: it’s the place where a great deal of technological, cultural and social changes were/are born and disseminated throughout the country and the world. Even Dancing Rabbit started there, before moving to Missouri. But, then again, Silicon Valley’s focus these days seems to have been redirected more towards getting rich quickly, rather than changing the world for the better. And I haven’t figured out how I can orient my skills and experiences to push for a more sustainable world in an impactful way. Perhaps nobody has.

I’m returning to Dancing Rabbit in October for their 3 week visitor program. My intention is to learn more about the inner workings of DR, and to also more fully experience life in an ecovillage. But, in the back (or front) of my mind will be this question about where and how I want to live, and how I want to orient myself to engage the world. I don’t expect to have answers. But I hope to have another piece or two to fit into the puzzle of my life. 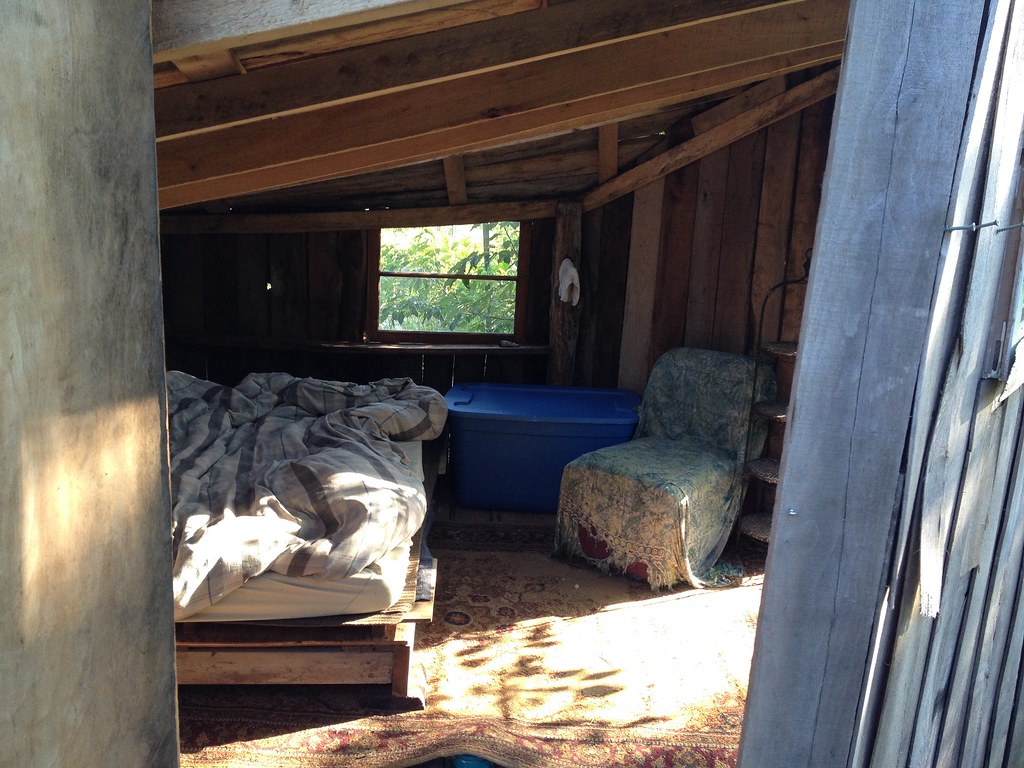 I’ll be living in this cozy little “Summer Cabin” when I return in October!